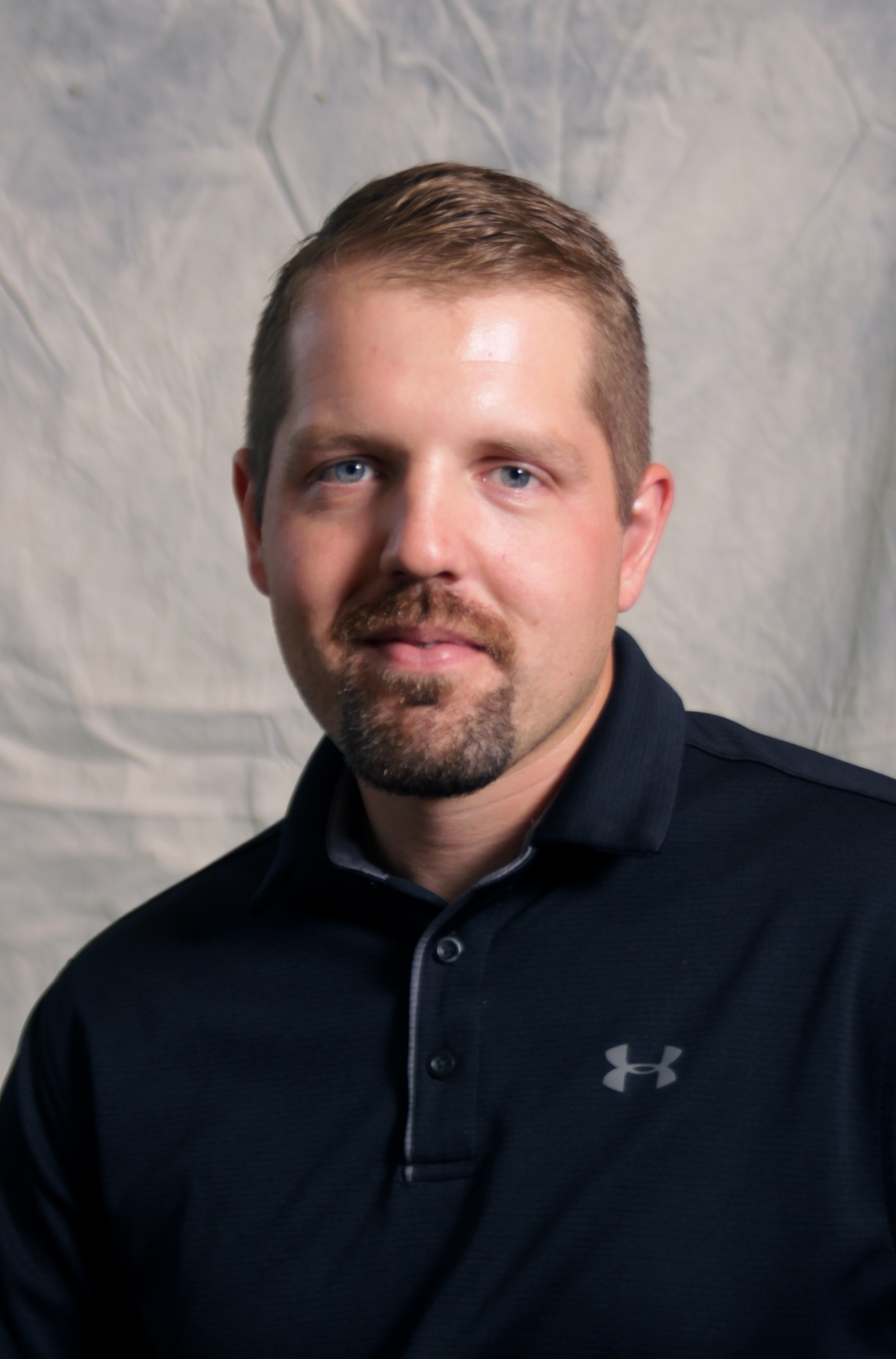 CAR is pleased to welcome (back) Mike Mendolera to the CAR team.  Mike began his machining career here at CAR in 2009 when we hired him for our CNC department.  Mike started out as a machine operator on our night shift.  We quickly recognized his talent for machining and moved him to day shift where he worked under our top mill and lathe staff.  We sponsored him for the NYS apprenticeship program and he received his journeyman papers in 2015.  He became very proficient in programming, fixturing, and overall machining of all CNC parts.  In 2015 Mike resigned from CAR to take a job at Five Star Tool in Rochester as a CNC Group Leader.  During his 2 years at Five Star Mike continued to improve his machining skills and gained exposure to 5-axis machining as well consumable tooling.

When the CNC Manufacturing Manager position opened up, we knew that Mike would be the right fit.  Not only is Mike an excellent machinist but he is very familiar with our equipment, staff, capabilities, and customers.  We are thrilled to have him back at CAR and the newest member of our management team.

Since our last newsletter publication we have had 3 employees hit major milestones in their CAR careers.  The first employee to be recognized was David Vincent, CAR’s Quality Manager.  Dave held the distinct honor of becoming the first hired employee to hit 30 years of service!  Dave was hired on June 1st, 1987, only 6 months after the company was founded.  Dave started out in shipping and receiving before Charlie (founder of CAR) recognized that he needed a full time quality person.  Dave has been overseeing our QC department ever since.  It is extremely hard to put into words what an incredible employee Dave is.  He shows up every day to work at 4:30 am and regularly puts in 12+ hour days.  He is always smiling, joking, and is a friend to all.  Last year Dave was diagnosed with stage 4 colon cancer.  Of course CAR said to take off as much time as he needed but he insisted on coming in and missed as little time as possible.  I am happy to report that Dave has beaten colon cancer and is in remission.   Since Dave was our first employee to hit 30 years management decided he would receive a “custom gift.”  What to do for Dave?  All he does is work!  Well his son lives up in Canada so CAR paid for an all expense trip for him and his wife Mary to go see their son and grandkids.  Congrats Dave on this honor. 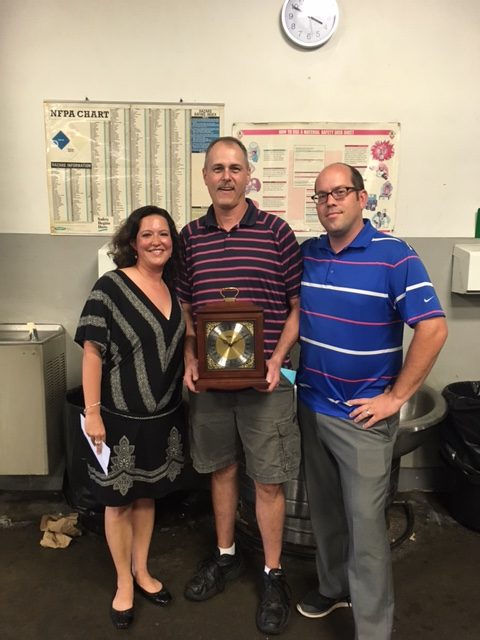 The next employee to hit a career milestone was tool and die maker, Robert Starks.  Rob’s original start date was back in 1998 and at that time he had moved from Tool and Die Maker to Tool Room Supervisor.  Rob left the company in 2005 and pursued a career in real estate.  Realizing his passion was in stampings and die making Rob elected to come back to CAR and re-started in April 2007.  Rob is an outstanding die maker and trouble shooter and has particular strength in our unique multi-slide dies.   CAR recognized this ability and along with tool and die making, Rob is also the Continuous Improvement Specialist for the stampings department.  His job is to make good jobs run even better or fix problem jobs.

Rob hit 10 years of continuous service and was recognized at the employee meeting with our 10 year gift- a lovely mantel clock.  When not at CAR Rob enjoys playing in his golf league and working on his house.  He is also focused on is new “baby” a rescue dog, named Sheldon.  Congrats Rob! 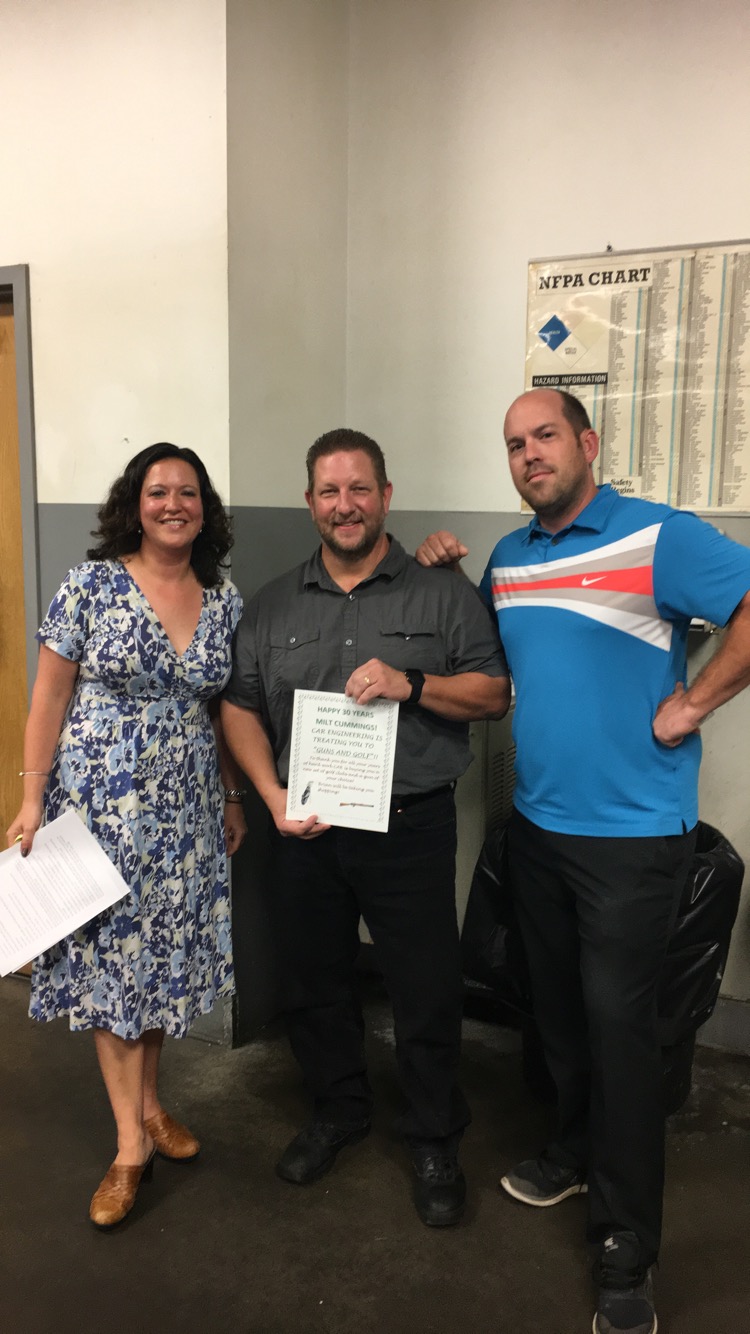 Milt Cummings also hits the big 3-0!  Another stellar employee to hit a major milestone was none other than Milton Cummings, CAR’s VP of Operations.  Milt joined CAR on Aug. 10th 1987 and just by luck the employee meeting was held 30 years to the day he started.  Milt began his career as a Tool and Die Maker out on the floor.  After a company softball game injury, Milt was put in light duty for 12 weeks, and he went in the office to work as a die designer.  He has been in management ever since.  He worked for many years as a die designer, quoter, and project engineer in stampings. In 2011, along with his other duties, Milt was promoted to head of our stampings department.  Milt really stepped up and did an outstanding job as the head of stampings.  In 2016, CAR figured if he can oversee stampings, why not have him oversee the entire plant?  So, Milt was promoted once again to his current role as VP of Operations.  Respected by all for his “no nonsense” approach, dedication to CAR, and extremely strong technical skills, Milt is a critical member of the team.

When not a CAR Milt has a variety of interests- especially spending time with his family, wife Sue and adult children Nicole and Ryan.  For his custom gift CAR choose 2 items for Milt…”Guns and Golf.”  An avid hunter and golfer-fitted golf clubs and the gun of his choice are perfect for Milt.  Thank you for your service to CAR Milt! 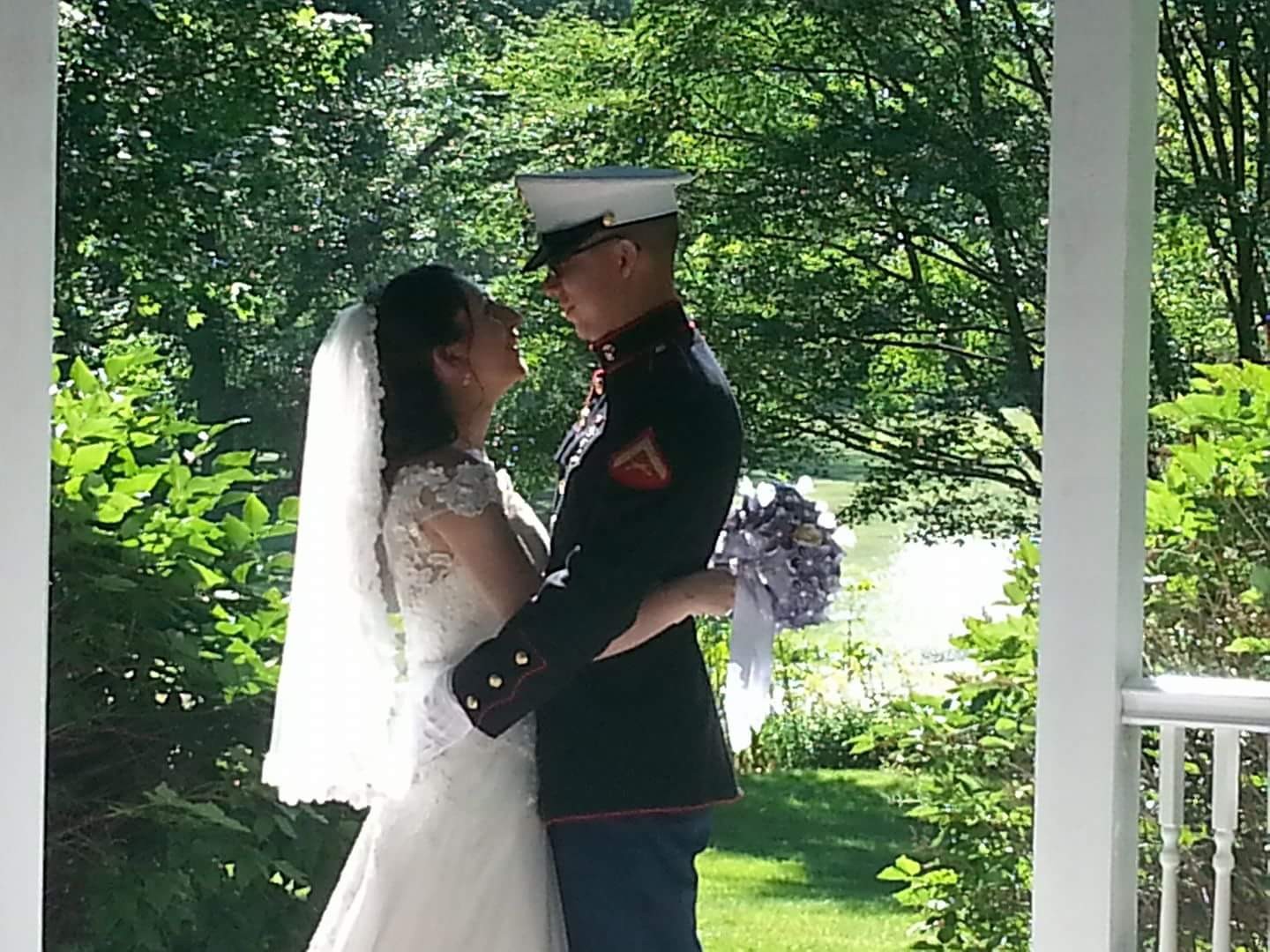 Jeff and Paige- tie the knot!

Congratulations to Tool and Die Maker Apprentice Jeffery Wong on his marriage to Paige Iovine.  CAR recently sponsored Jeffery for the NYS Apprenticeship program.  Jeffery works in both the CNC and stampings departments but his concentration for his apprenticeship will be in tool and die making.

Jeffery and Paige have known each other since elementary school but began dating in 2010 shortly after they graduated from Greece Odyssey High School.  They were married on July 9th 2017 at the Plantation Party House in Spencerport, NY.  After their honeymoon in the Mexican Rivera, Jeffery was at work for 2 days before he needed to leave again for 2 weeks to fulfill his Marine Core Reserves annual training.  We have missed Jeffery around here but we are proud to have an employee in the reserves.  Paige will be starting her duel master’s in Public Health and Social Work at the University of Buffalo in the fall.  Congrats to this great couple.